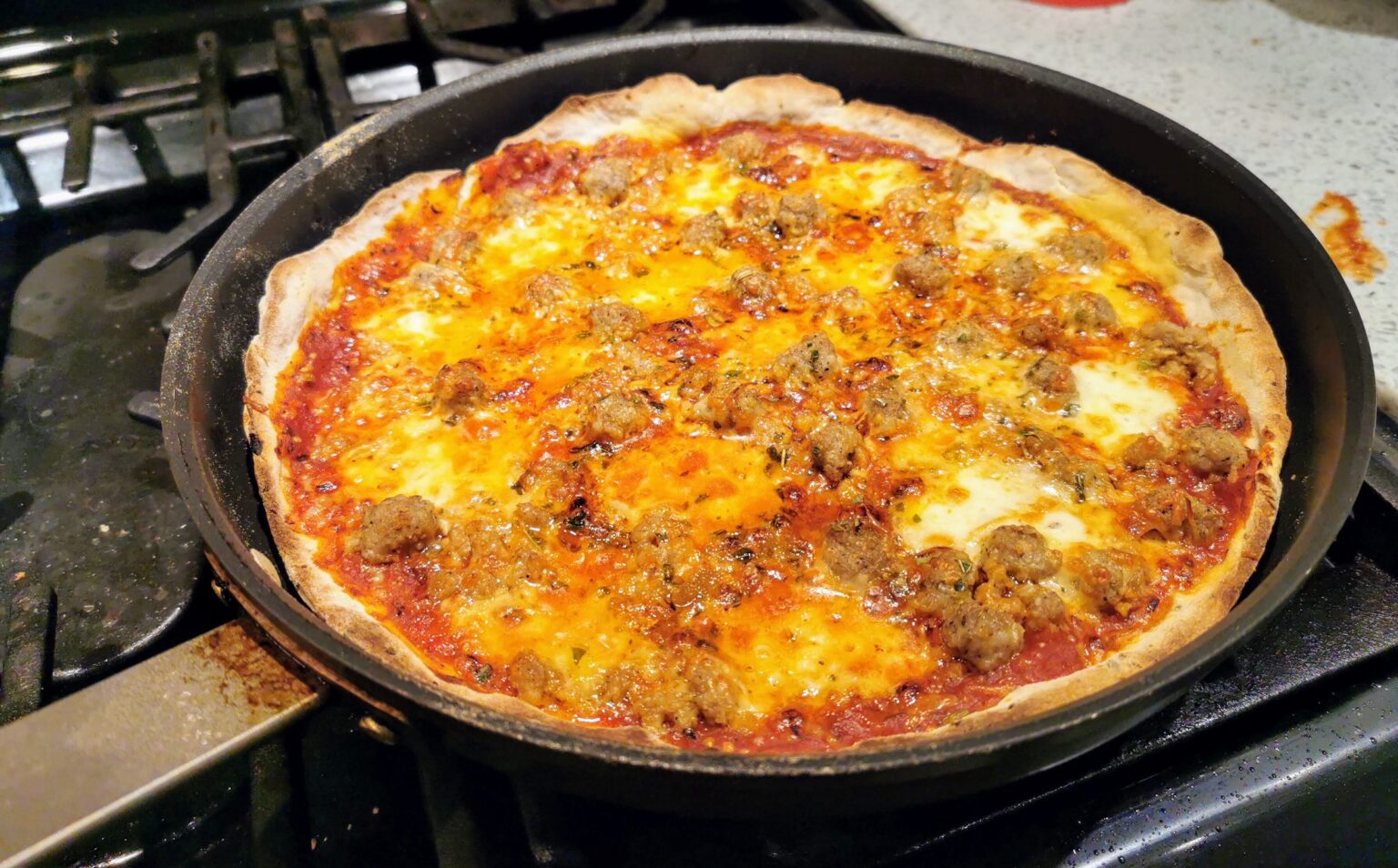 With COVID-19 and the whole stay at home thing, I’ve been watching a lot more telly of late, and I discovered two of Jamie Oliver’s shows on CTV Life in Canada: 15 Minute Meals, and 30 Minute Meals. There’s actually quite a lot of good tips in both of those shows for cranking out quality food in short times, but the best thing I learned from the show — by far — is Jamie’s “Cheats Pizza” recipe from one of the 30 minute meal episodes.

In short, Jamie makes a super quick dough in a food processor with a dough blade, using self-rising flour, which is typically used for sweetbreads and low-sugar confectionary bready foods. He adds 1 “builder’s mug” (his word for a coffee cup) of the self-rising flour, 1/2 a mug of warm water, a tablespoon or two of his ever-present olive oil, and a pinch of salt.

To continue, he rolls out the dough to a 13″ circle, flours it up (so it doesn’t stick), folds it into half, then a quarter, and places it in a pre-heated, oven safe 12″ skillet pan, and unfolds it to fit the full pan, with some of the dough riding up the sides of the pan.

He very quickly builds and preps the parts of the pizza while it is cooking in the pan. First, he makes a sauce from scratch in about 1 minute (food processor help), then spreads that on the rising dough (self-rising dough is activated by heat). Next, he chops and adds his toppings, like olives, onions etc. Adds some crumbly meat, tops with mozza shred, parm, and more olive oil. By this time, the crust of the dough is starting to brown. He pops the entire thing into an oven with the broiler on for 5 min, and removes a well baked and cooked pizza with golden cheese on top.

All told, the build time is about 20 minutes from starting the dough to the finished pizza.

I did his recipe almost to the exact, and while it was good, I’m a tinkerer at heart and could think of some improvements. So I explored them.

The first thing that needed work was the dough. I add herbs and spices to the dough when making it; use a flavoured olive oil (garlic infused); modify the flour component so it’s 7/8ths self-rising flour, and 1/8th corn meal; fold the dough several times after removing it from from our food processor (again, using a dough blade, not the standard cutting blade); and then I let the dough rest for 5–10 mins before forming it.

The herbs is something that, as far as I know, is only available in Canada. It’s by a company called Cool Runnings (Jamaican influence), and it’s their garlic, pepper and herbs blend. I love this stuff and use it in a lot of recipes. I put about a rounded tablespoon into the dough while mixing it.

I use flavoured oils in the dough making too, and double Jamie’s amount — so about 2 tbsp of a garlic or truffle infused oil. I also omit all salt, since the spice blend has a bit of salt taste to it.

I also wanted a bit of cornmeal in the dough, so I swapped out 1/8th of the self rising flour for cornmeal.

After running the food processor until a wet ball of dough forms, I remove it from the food processor, and form it into a log. I fold it over itself, and repeat. Getting these folds in help a bit with the structure of the dough after it rises a bit.

After a 5 minutes of rising, I turn the gas stove top on, and get a 12″ oven-safe skillet on, with good quality olive oil in it. I let the dough rise for another minute or two before I start forming the pie shape, both with a mini roller pin and my hands. Once I’m happy with the size, I flour it up (so it won’t stick), fold it in half, fold it in half again (so I end up with a quarter wedge of dough), and very carefully place it into the super hot skillet, unfolding it to form the full pie shape. It’s at this point I also turn the oven on to 450F, to heat up for the broiler action.

This pizza has the potential to be a “deep dish” style because the dough rides up the sides of your skillet pan. So another change I’ve added borrows from building a deep dish pizza: I add shredded cheese first to the dough as it heats up and bakes. Then the pizza sauce goes on top of that.

I don’t go all out on deep dish’s literal pounds of cheese — I use almost the same amount I would in a normal pizza build (in this case, about 200–225g of mozza and parm for the 12″ pie). I use about 2/3 of my mozzarella cheese for the base, then my own homemade sauce (from our garden tomatoes last year!) goes on top, generously. Then toppings (our fave: pepperoni, fresh kalamata olives with stones removed, chopped red onion, cherry tomatoes), then the other 1/3 of shredded mozza, a dusting of grated parmesan, and a light swirl of olive oil.

By this point, the crust has started to go golden (check it with a spatula). I change the oven from bake to broil (high), and place the skillet right under the main fire in the gas oven, on a high rack (so it’s about 6″ from the flames).

4–5 minutes later, you have a beautifully baked pizza with lots of good char and a really tasty, savoury crust!

The entire build, for me, takes about 30 minutes to pie being cooked and done. You can prep your cheese and ingredients (and even make a sauce from scratch) while the dough is resting. If I really worked at it, this could be a 25 minute recipe. That is a cheats pizza!

Quality ingredients = quality pizza. I found some amazing pepperoni from a local store a while back, and it’s all I use. I use whole kalamata olives, removing the pits and slicing them before putting on the pizza. And last year, I made about 5 litres of pizza sauce-ready tomato sauce from our garden tomatoes. (I still have about 500ml left!). We use a 24% mozza that melts and goldens very nicely.

February 9, 2000 No Comments
Get The Latest Updates