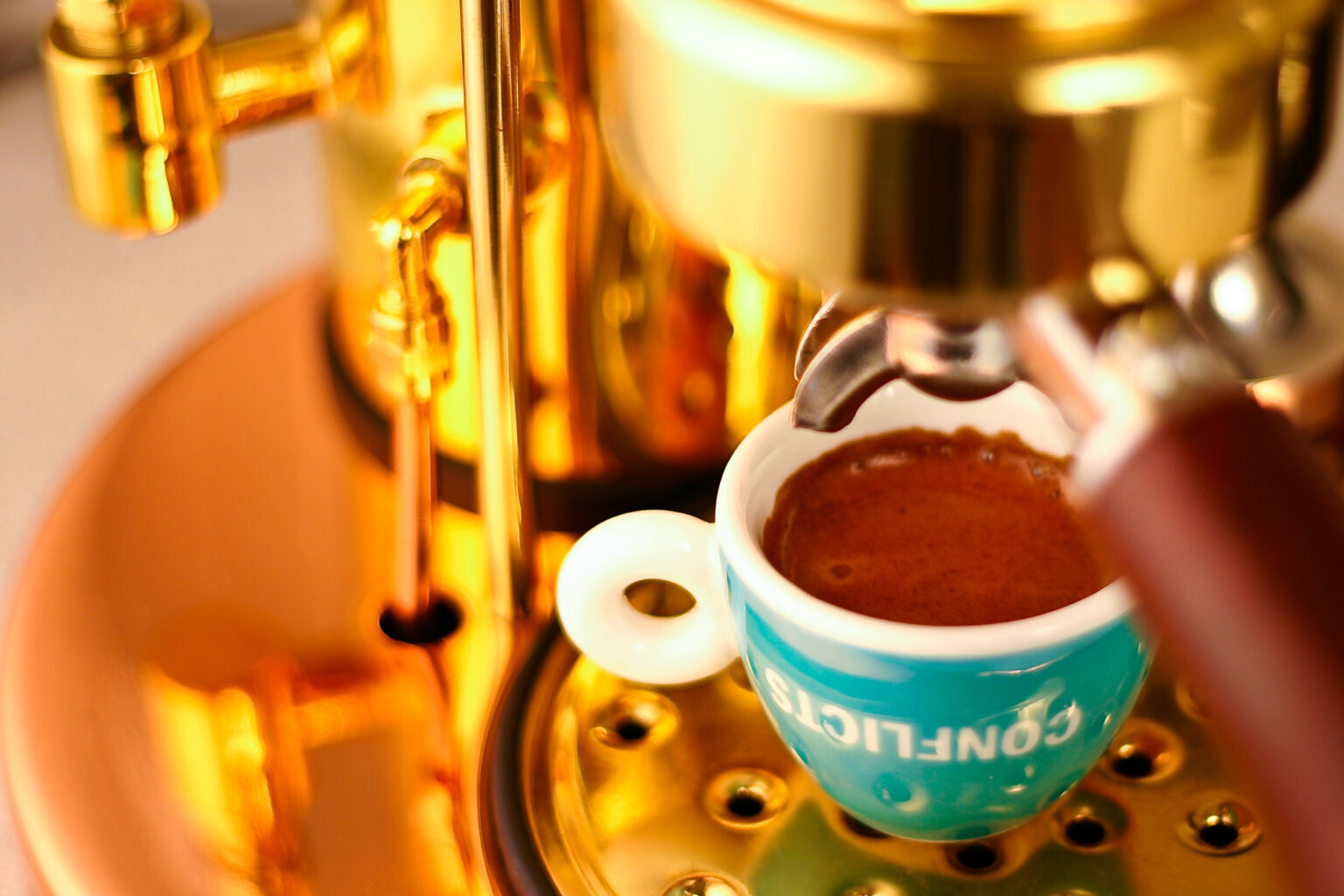 Last Thursday, I was seriously inspired, and I wrote a long rant about why I’m so coffee obsessed. One of my best rants in a year… but I’ll try to write it again. But not now. I’ve got other coffee stuff to write about.

And away we go…

See the cups to the right? Those are the Illy Art Series cups made by David Byrne (ex of the Talking Heads), called Aliens. You can buy them from Chris Coffee if you like – they also come with a matching sugar bowl, but they ain’t cheap. In fact, many of the Illy Art cups go for about $110 USD new, and often much, much more when they’re a few years old. Reason is, Illy issues 4 or 5 sets a year, and they only last a year – they get retired, kind of like Beanie Babies. Illy sets from 1994, 1995, can fetch as much as $800. I have a feeling the Aliens cups will do the same.

As many of you know, I run a coffee related website, CoffeeKid I wanted CoffeeBoy, or CoffeeGuy, or CoffeeDude, but they were all taken, so I got CoffeeKid. When I was the youngster on alt.coffee, they all called me the coffee kid anyway. The site’s pretty popular, and is soon to be joined by a new venture called CoffeeGeek.com we’re actively working on.

Real espresso is the best essence of what the roasted coffee bean can provide, in a super concentrated format. A properly crafted espresso is naturally sweet because when it is properly made, eg using 14-17 grams of super finely ground coffee, tamped, packed into a portafilter, and run for approximately 25 seconds on an espresso machine, well that properly made drink didn’t allow enough water exposure time to draw off the bitters that live inside roasted coffee. But it did allow enough time for all the super rich flavour colloids, oils, and aromatics from the ground beans to pass through and fill your tiny cup. And surprise surprise, that properly made drink didn’t allow enough time to draw off very much caffeine!

That’s right. Most people are very surprised to hear the following, but I’m telling you the gospel truth here: a properly crafted double shot of espresso, that is roughly 2-3 oz of espresso using about 17 grams (or 2.5 tbsp), has about 1/4th the caffeine content of a typical 12oz mug of Folgers Instant. Bottom line is, a double shot of espresso, properly crafted and using premium Arabica beans has only a bit more caffeine than many soft drinks on the market today. Surprised? My s/o still doesn’t believe me.

Here’s the deal. There’s basically two families of coffee beans – arabica and robusta. Arabica is much more sensitive to growing climates, but is also the greatest coffee. Robusta is “more robust” and can grow where Arabica can’t. There is a lot more robusta grown in the world than there is arabica, and premium arabica only accounts for about 15% of the total arabica coffee growth on the planet. I roast only premium arabica beans.

The real bad thing about Robusta is this a) it has more caffeine – double what arabica beans do, and b) it tastes like shit. Well, not shit, but very rubbery.

Now many of the world’s famous coffees – Colombian, Brasilian, Kenya, Sumatra, Yemen, Costa Rican, Jamaican Blue Mountain, Kona, etc etc are all from the Arabica class of beans. Some are more hardy than others, some taste much better than others. But the majority of the coffee beans used in a typical can of Folgers crystals or preground is from robusta beans from Brasil, Indonesia, and nowadays, Vietnam, which is responsible for a glut of coffee in the world market and the record lows that coffee is currently selling for on the trade market.

And don’t be fooled by a can of Nescafe that states “Colombian” or “Costa Rican”. I can tell you with certainty that those instants do contain those beans, but the majority of the beans used are robustas from Brasil or Vietnam, blended with sometimes as little as 10% or less Colombian.

But this rant isn’t about arabica vs. robusta, or how crappy Folgers is. This rant is about the artistry that is espresso, and my obsession with coffee and espresso. Let me get back to that.

See, making a finely crafted espresso really is an art. There’s science involved, but this is a crafted drink. So many skills are required, so much training and practice to produce something called a “god shot”, it isn’t funny. God shot is a relatively new term invented by myself and others in the newsgroup alt.coffee – it refers to a shot of espresso so exceptional, that it must have been blessed by God himself, who must be an espresso lover. Some of the world’s best baristas only achieve god shots about 1 out of every 8 or 10 attempts. Myself? I’m lucky if I hit 1 out of 15 shots. Don’t get me wrong – most of the espresso shots I craft are good. Some are great. A few are exceptional. But once you’ve had a god shot, you’ll know why those stand out.

Imagine, for a second that you are a person who does need sugar in their coffee. It’s bitter otherwise, right? Most Italians take sugar in their espresso, partially because Italy has a tradition of using a fair amount of robusta in their roasts. Now imagine for a second drinking that coffee sans sugar. Makes your lips purse, right? Makes you wince. Well, if you are that sugar person, a god shot is a drink you, mister sweetener, can drink SANS SUGAR. It’s that naturally sweet, with a clean finish and super complexities in the mouth. Betcha never thought it’d be possible, huh? A shot of espresso you can drink without a sweetener!

But as I said above, those shots are fleeting. I take sweetener in my espresso… most of the time. So how do I know I got a god shot, and don’t need any additives? Here’s the deal. It’s all about skill, perception, and artistry. Here’s what is involved in making, nay crafting espresso.

You need a great grinder. Blade grinders (aka weed whackers) don’t “cut it”. Neither do those $40 Brauns and Salton grinders. Bare minimum is the $100, $120 grinders. More acceptable is in the $200 range, and there’s my grinder, a $650 Rossi RR45 commercial espresso grinder. The grinder makes or breaks the shot. And so do fresh beans. Anything older than 5, 7 days off the roast (not from the day you bought it, but from the day it was roasted), and it’s garbage.

So you grind your fresh roasted beans. But it’s not that easy. You need a month or more to get totally familiar with your grinder, to get it “tuned in” to your espresso machine. Actually, it has to be “tuned in” to you – you have to know the variances it is capable of, the affect things like humidity, bean age, time of day, etc etc have on it, and you have to know from a simple glance what kind of tamping pressure the grind is going to require. You have to know how your espresso machine will react to a given grind. Only practice and experience gives you these skills – you can’t read them in a book.

So it took you a month or more to just grind those darned beans. Once you’ve ground enough, you clackity clack the grinds from the doser on the grinder into your portafilter – the handled device that locks into the espresso machine. You quickly look at the grind fineness, then grab your tamper – no plastic cheeze one either, but a heavyweight, solid metal tamper with a base of about 1 inch tall (and a handle that’s about 3 inches above) that cost $20 to $50 on its own. Then you tamp… press down, 25lbs of pressure, twist, flick the wrist, knock the side of the portafilter to knock loose grinds from the walls of the filter, then another press and quick twist to “polish” the surface.  Then you “lock and load” – put the portafilter into the machine and lock it into place.

And here’s where another month or two of dilligent practice with a quality machine pays off – you know, instinctively, what condition the machine is in, and what the approximate temperature it will deliver to the grounds. More expensive ($1000 or more) machines will have a pressurestat that is adjustable and a pressure gauge visible on the front. Sometimes you want to wait until the gauge hits a certain spot before you brew. On machines with heat exchangers (HE), you want to flush the HE before actually locking and loading. This gets excess heat out of the system, ensuring perfect brewing temperatures between 192F and 200F. And you know all of this because you are a skilled barista who has spent months, years, decades learning, practicing and experiencing all of this. This is stuff that the typical minimum wage “barista” at Starbucks or some nameless “coffee stop” just isn’t capable of understanding. Some do… don’t get me wrong. But most don’t.

Then you brew your shot. My shot of choice is called a “double ristretto”. A normal single shot of espresso is 1.5 ounces using 7 grams of coffee. A normal double is 2.5 to 3oz using 14-17g of coffee. A ristretto is a “restricted shot”, as in less volume for the same amount of grinds. If you remember what I said above, you’ll recall that caffeine and bitters take longer to extract than the flavour oils and aromatics. A double ristretto uses about 17g of ground coffee to produce a beverage of 1.25 to 1.5 ounces total. And that’s what I pull, all the time.

And sometimes they be god shots. Most of the time, they just be good.

With all this passion and attention to the craft that is espresso, would you consider anything less than a cup that costs $25 a set? I think not. Artistry begets artistry. You don’t put an original Monet up in an Ikea frame. 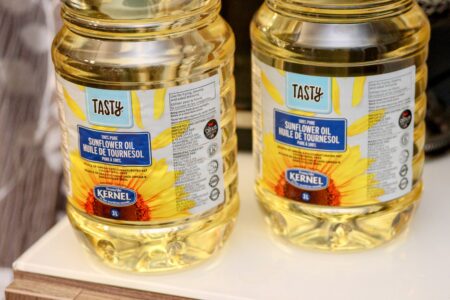