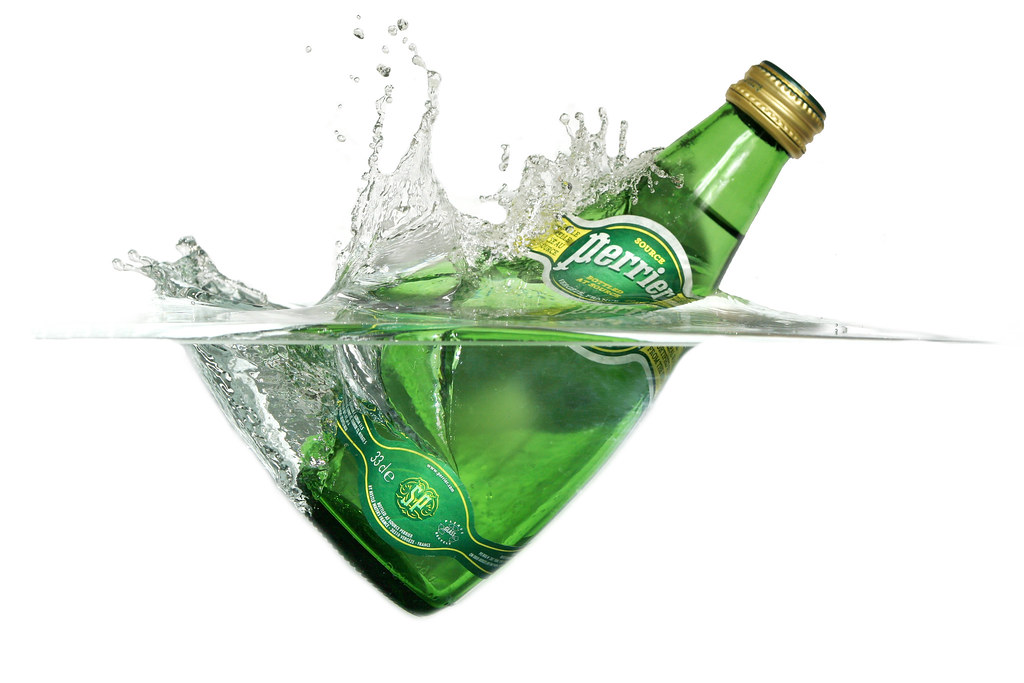 Gasp. I’ve become one of those people.

I drink Perrier. Copious amounts of the stuff.

Gah. One of those people. The PerrierPeople™.

Okay… so it’s not so bad. See, here’s the deal. I drink too much pop. Diet pop always (diet coke, pepsi, 7up, you name it), but way too much. So about six months ago, I decided to give club soda a go. I’d pour a little OJ into it to make it palatable. The big problem with club soda is it has absolutely no taste, and goes flat real fast. Even the act of pouring OJ in it the wrong way makes it go flat.

So one day at Costco, I saw a case of 24 bottles of Perrier being sold for $13.80 (plus enviro fee, which I have no doubt is not used for the environment by our benevolent rulers). That’s about $8 G.W.s for you Yankees out there.

I have tried Perrier before, of course – while in France I drank it because it is the defacto bottled water (along with Evian) everywhere you go. I never liked it much though – a bit too salty was my lingering impression about Perrier.

But I bought a case. And I drank it. Salty… yep, I remember that taste. Didn’t much like. But I drank it anyway.

And you know what? By the end of that 24 case, I started liking it. A lot.

And now, I go through a case every week or two – about 2, 3 bottles a day of the stuff. I can’t get enough. I use it for cleansing my palate when sampling different espressos (it’s awesome for that), and just when I want a little carbonated taste in my mouth. Which is often. And no other carbonated water seems to do as good a job of “cleansing the palate” for my coffee tasting. I’ve tried them all, from San Pellegrino (Italian fizzy stuff) to different brands of club soda. Perrier’s the best.

What I especially like about Perrier is the fact it is naturally carbonated, not injected like club soda. Perrier comes out of the ground infused with carbon dioxide, and it has staying power – I routinely leave open half-drunk bottles of Perrier all over the place, and half a day later I can go back, drink, and while it is room temperature, it’s as fizzy as when I opened it. Try that, Canada Dry!

I’m a PerrierBoy™. Sigh. Oh well, at least I’m not one of those pretentious ones… ordering Perrier at expensive cafes just because “it’s cool”… naw, at those cafes, I order my americanos and drink tap water with ice cubes. With  a twist of lemon, of course.

Well, gotta go. I’m out of Perrier, and need to pick up 2 or 3 cases from Costco…