Hola! Part two of this very long rant. Before I get into a continuation of what I was talking about last time, there’s just a few news updates.

Brag Mode Site logs (as opposed to weblogs) are very cool. They let you discover things like this. Coffeekid.com has been a pretty good success, and in any given day I get about 10 to 15 complimentary emails (along with as many as 25 or more question emails), but when peers in the industry recognize the site, or more importantly recognize something I pride myself on – navigation controls – it really makes my day. Brag Mode Off

And now for part two. As I said at the end of the last rant, my company WebMotif went from a 1 man show a year or so ago to 5 people doing what I think is pretty good work. We’re creative, we do some innovative things, and if I had to place the company on a rating system, I’d say we’re a 7.5 out of 10 in terms of quality, innovation, skill and ability. The 10 out of 10 guys are the ones who charge a million bucks for site development. The 5 out of 10 guys are the ones that are one man shows and just able to use Homesite. The 4 out of 10 guys are programmers who think they are designers, and everyone below that are folks using WYSIWYG editors like Front Page :-).

WebMotif is doing well, but we’re not quite “there” yet. We hope to have a proper office environment by the end of this year, and maybe double the staff. I’m working on this, which is partially the reason why this site has such infrequent updates.

I’ve been thinking a bit about back when I first started this company. I had the idea I could work as partners with two other people – a javascript expert down in Nevada, and a Photoshop expert in Georgia. At the time, my photoshop skills were weak (these days, they are pretty superior, lemme tell you :-)). I would be the coder and programmer. But the scheme didn’t work out. One of the participants lost interest or went nuts or something, and the other disappeared for a year, then called me out of the blue expecting to go back as full partners, after I had worked to build and maintain my business, on my own, for a year.

I’m not pissed or anything, but I did realize that while I try to work with my subs on an equal basis, I realize that at least in my situation, there can be only one boss… the client. Okay, well, I’m the boss, the guy in charge, the guy who takes the fall if things fuck up. I don’t mind that, because the perks of running the company are finally coming to fruition for me. I’m just very, very thankful the original plan for the business fell through 🙂

Okay, for something completely, totally different, you may remember that near the top of part one of this rant, I mentioned the CoffeeKid site. I was interviewed by a radio station in New York City called WNEW, and it was on the Ron and Fez show. The interview went well, but before (and after) the interview, I had one thought in my head: what exactly am I trying to promote? CoffeeKid’s a non-commercial site. I don’t generate any revenue from it. In fact, because of the site’s current traffic (as much as 5,000 unique visitors a day, about 30,000 page views per day, and about 14 gigs of traffic in March), it’s costing me extra in hosting – one of the reasons why I’m spinning off the review section to its own domain at www.coffeegeek.com at some point in the future.

Everyone who writes to me about the site and my hosting charges thinks I’m nuts for not running advertisements. But to me, coffeekid.com is my hobby site, my personal site. I’ve always had a problem with people running ads on their “personal sites” Always. I hated Link Exchange when it first came out. I eschew any kind of webring, which I feel is just some sort of hit generator for the organizer’s site. I don’t like it when sites have Amazon.com partnerships. Ditto for cdnow. The day Glassdog had those things on that site, I kinda lost faith.

Which segues me into the tease from the part one of this rant. Ezines.

I love the new ezines online. Some are for men and are trying to be like Maxim (but are still cool). Others are creating their own niche, like the aforementioned Nerve Magazine and Spark Online. I love these things. The writing is fresh, the topics fresh, the writers good, and the content is cutting edge.

These sites are leaving the oldbie zines like the Onion and Salon in the dust. (ed.note 2021 – I guess I was wrong on that – both Salon and The Onion are still around going strong – nerve, spark? Long gone).

Which makes me think. A few years ago there were some people online who thought “they” were “the web”. They thought theyo embodied it, who were “the voice of the web”… where are they now? They sure as heck ain’t writing for Nerve. They ain’t writing for any of the cool ezines. They’re still writing for their own core circles.

Maybe they feel what they have to say is still important, is still “the conscience of the web”, but I have to say they sure aren’t the voice of the web today. The Web has moved on. The Internet has grown up, and I think it’s ready to move out of the high school, clique-ey mentality that existed for the last 4 years or so. Pretty cool, eh?

If you want to see the state of the Web conscience today, I’ll push it one more time – Spark Online. This is where it is at. I think it’s heading in a very cool and innovative direction, yet again.

Hey, if you missed the first part of this rant, go read the May 4 2000 rant first! Hola! Part two of this 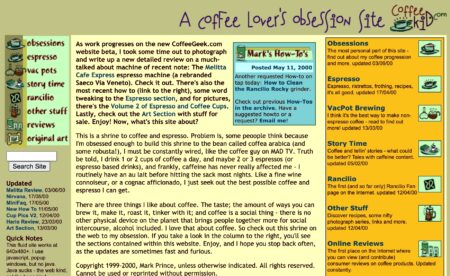 I’ve got some news for you all. I bought another new domain name a few months back. As many of you know, I’m

The Tragically Hip are the Coolest Band Ever

I’ve come to the conclusion that the Hip is the coolest band on the face of the earth. For those of you who