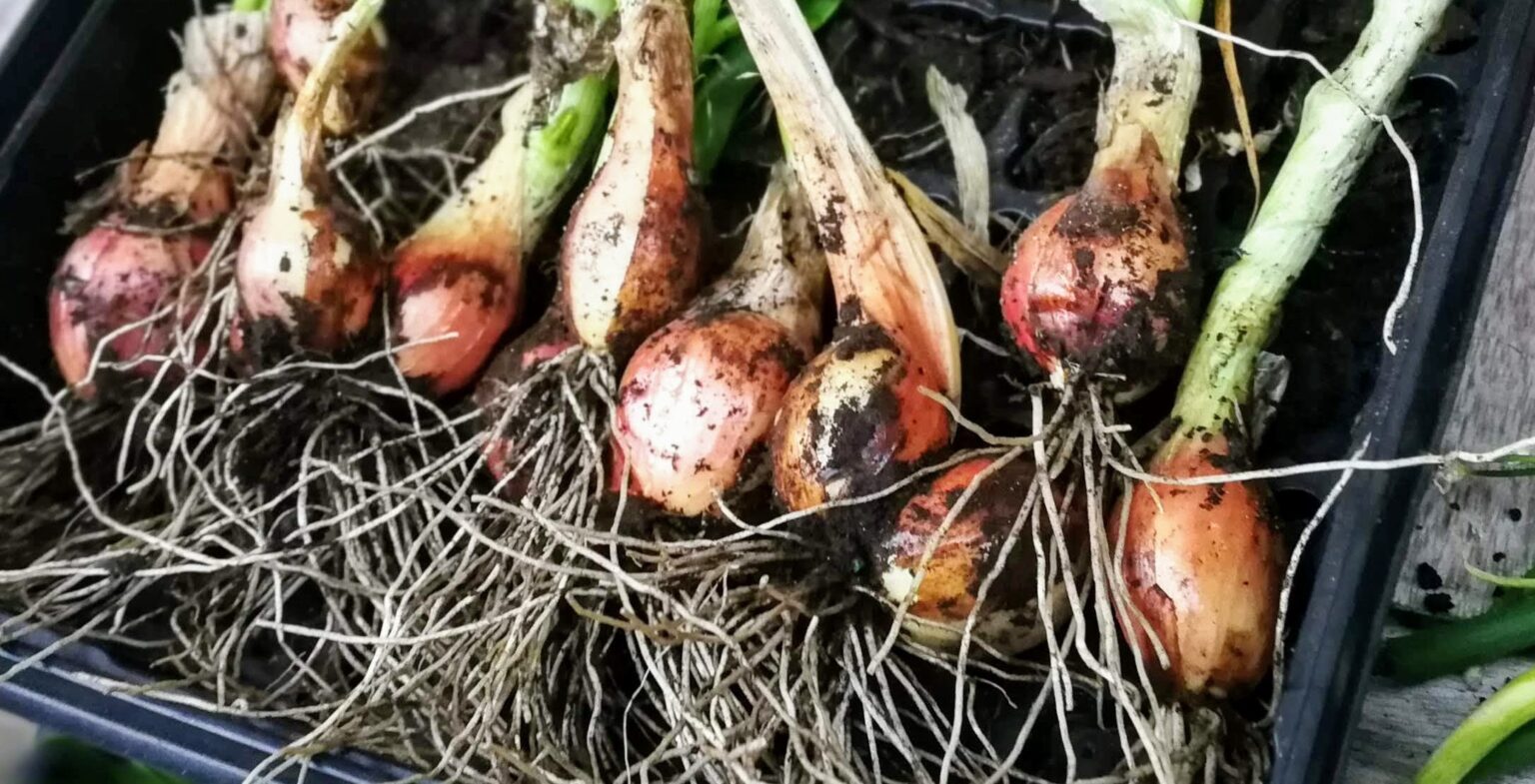 “Say, what’s that type of onion there; I don’t recognize it.”

“Well, let me tell you. Plant this onion in an area with good soil that drains well, and then basically ignore it. Come back in 2 to 4 seasons, and your entire area will be filled with them.

“Because this onion literally will walk across your field as it grows. That’s how.”

That was my introduction to the “Egyptian Walking Onion” when I first spotted the plant at a GardenWorks in Victoria, BC, a year ago. Of course, I didn’t believe the horticulturalist on staff at the time (I should have!), but I was intrigued. I asked him to tell me more.

“You see, most onions are biennial; they’ll last 2 seasons, then kaput. This one is a perennial onion, but with a twist. Where most onions will grow a large flowering pod in their second year, this one does something special in its first year. It grows a set of onion bulblets midway up its strongest stalk. As those grow and get larger, the weight of them makes them fall over, usually as much as 30 to 60 centimetres away from the mother plant. Once those bulblets hit the ground, still attached to the mother plant and it’s stalk, they start sending out roots and establish as a new growing set of onions for the next season. And then the next season after that, it happens a dozen more times, all from that mother plant 2 seasons before. Each time the plant re-establishes itself another foot or two away from the mother plant. Thus the “walking onion” characteristics!”

Now I was definitely intrigued. I love strange and unique culinary plants, and this sounded like one. “How’s it taste?” I asked.

“I sure do, it’s my favourite onion!”

“Well then, you’ll love these. They’ve got even more heat than shallots and look, cook, and interact with other foods in a similar way!”

Sold. So I bought a healthy plant for around $8. Rushed home, and planted it. This was in June, 2017. And before I really saw any results from it, I wanted to know more about this intriguing addition to our garden.

So it turns out this type of onion is actually called a tree onion, and I’m going to assume the nomenclature of “Egyptian Walking Onion” was 100% marketing. Origin is muddy and not documented, but it’s been proven genetically to be a hybrid between a common onion and a Welsh Onion. Still others believe it’s a hybrid between bunching onions and shallots.

The onion is perennial, meaning if you leave the mother bulb in the ground, it will just keep growing and growing, every year, with a bonus: every growing season it will split and produce more bulbs, in the ground! The inner bulbs will get tough and too hard to use, but the outer bulbs will be fresh and tasty and perfect for cooking if you gently separate and remove them from the mother cluster of bulbs.

And there’s the bulbets that form up the main leaf stalk each season. Each bulbet is a tiny version of the bulb below ground, ready to be removed and replanted, or you can let the plant do it’s own thing — watch the bulblets all fall over as a cluster, and take root in the soil a foot or two away from the mother plant.

The plant is also very hardy; it survives just fine in Zones 3 through 11 without issue. It may all die back in frost and snow cover, but it’ll be back just fine and growing again next spring. The only knock against it is that it doesn’t store well; harvested bulbs should be fine for a month or two in the fridge at most. But since you can choose to leave the mature bulbs in the ground until you want to harvest, just approach these onions more like carrots or turnips: leave them in the ground until you want some.

It’s kind of a wonder onion. Super easy sets produced every year, it’s perennial, and it produces clusters of split off bulbs in the soil if you let the mother plant stay put. But how does it taste. Let’s get to that in a moment.

My First Year with a Walking Onion

I planted the onion in our back window raised box; it’s about 7 feet by 3 feet, and is 4 feet off the ground at its height. It also gets the most sun on our property. It was planted among dwarf cherry tomato plants, lettuces and basil. And it took off. I was amazed to see within 45 days my new plant had indeed grown a set of bulbils halfway up the main stalk. It took about a month for them to form and burst out of their green stalk housing, but by then, each bulblet was about 5mm across. Just amazing.

I cut the stalk off, and separated out all the individual bulblets. The largest I saved for replanting — about 10 of them — and the rest I reserved for cooking use, as I read the bulblets are great for adding small dashes of flavour packed onion to various dishes. All told, there were at least 30 usable bulblets.

I was sorely tempted to pull out the mother bulb from the ground, as I noticed it had split and had about 6 new bulbs of various sizes (from about 5cm long and about 2–3cm across to as small as 1cm long. But I decided to wait until the fall, another few months away.

I did take the 10 largest bulblets from my harvest and replanted them in one of our other raised beds. Within just a few weeks, all the new planted bulblets were sending out stalks. Wowsa.

Now… cooking the bulblets. My first “taste” experience with the Egyptian Walking Onions. They were small, so I added about 10 to a pasta sauce I made from our garden tomatoes. Turns out that was way too much — they are super flavour packed and really influenced the sauce (in a good way, but it was more like an onion tomato sauce than a pasta tomato sauce with a bit of onion). All that from 10 tiny bulblets!

I also ate one raw. POW! Definitely a shallot taste, but again, with a tiny bit more heat, and quite pungent (which I want from onions). Seriously impressed.

Fast forward 2 months, and we’re into October, 2017 now. I chose this time to pull all the walking onion plant from our back window raised bed, seeing as how the 10 new ones I planted in another bed were doing fantastic, and had excellent leaf stems growing, even into a month that had daytime temperatures of around 12–15C at most.

The larger bulbs from the original plant were very nice indeed. By this point, the largest ones were around 10cm long and about 4–6cm across, but even the smallest ones (split off from the original bulb) were in the 5–7cm length size. They basically look exactly like shallots, and even have the colouring of dark red-brown shallots pulled from the ground. I was going to cure them, but after using one in a stew dish the night I harvested, it was so freaking good I just cleaned up the rest, and put them in fridge’s veg bin, to use right away!

The centre original bulb was a bit… hardy, but definitely useable; I used that one in a pressure cooker soup. But the outer bulbs were fine and very similar to shallots in how they cut up. They tasted like shallots too, but with more heat (and more heat than the bulblets had). Basically super charged shallots. They became my new favourite onion for taste, as well as everything else.

I forgot to mention one thing in all of this — the green leaf stems of the tree onion are also completely edible and delicious and delicate. Much more delicate than regular onion stalks and leaves. They’re quite close to bunching onions and even chives when harvested young, though the main stalks do get fibrous and tough as they continue to grow. You can safely harvest one or two leaves (the younger, more delicate ones) from each plant every month or two without worry at all about damaging the plant (just don’t cut the central stalk or the bulblet stalk). Treat them just like bunching onions (scallions) or chives. They taste similar, but again, with about 50% more heat.

The original 10 bulblets I planted last fall created a bed of walking onions in a 3×2 foot square part of our garden. Those 10 originals, as of this writing, have turned into about 25 bulbs in the ground, which we’ve been harvesting here and there since June for daily food use. each is the size of a small to medium shallot.

Most recent harvest from our own bed of Walking Onions. This is about 1/4 of our crop.

In addition, there were at least 10 stalks that developed bulblets of their own midway up. We harvested some of those in late June, and replanted them in starter trays (see the results of that in the photo). That’s 32 new walking onion plants, and we have dozens and dozens of bulblets left for using in cooking.

All of this from one plant purchased last fall.

I’ll be putting these new plantlings in the ground in the next few weeks; chances are, there will be young bulbs to harvest this fall (which is the plan; I don’t have enough space to let 32 walking onions mature in our garden over winter!); I may offer some up for sale locally in one of Victoria’s online garage sale style forums, since they still remain a rare plant.

The newly planted bulblets, already doing their thing. Going into the garden in a few weeks for fall and spring harvesting.

We’ve been cooking and using the full sized bulbs from the 10 plants of last fall, and the taste remains excellent — they are like shallots, but about 20% more “strong”, or pungent. That works fine for us! In addition, we’ve been using the green delicate young stems as if they were bunching onions all spring and summer, in salads, with potatoes, in soups, and on home made pizzas.

I’m still amazed at this plant, and surprised it isn’t more common in my part of the world. I guess I can understand if you have a preference for sweet onions or white onions. Those types of onions are big, cut well for strips, and are way more delicate in flavour than these walking onions. If that’s the kind of onion you only like, these will not suit you. But if you like using scallions, like using chives, and especially like shallots, you should really add Egyptian Walking Onions (or Tree Onions) to your garden for next season. Find a plant now, get it in the ground, and within a year, you’ll have the foundation for dozens of them with an ever-returning bountiful harvest.

August 23, 2021 No Comments
Get The Latest Updates 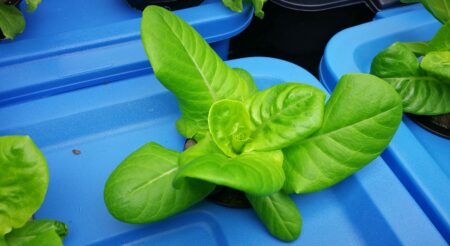 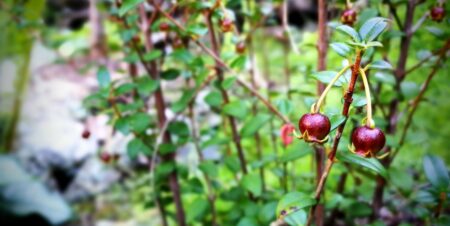 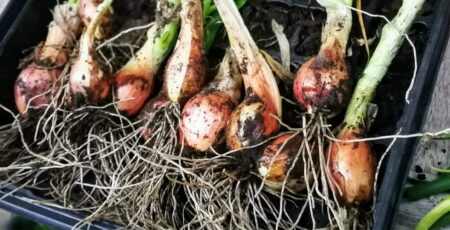