Has anyone noticed how the term “docking” has become such a common part of our modern day lexicon? Only a decade ago, the term was reserved primarily for space shuttles docking with the Russian MIR orbital station. Today, I counted the terms “dock” and “docking” no less than 14 times while reading the Saturday paper… and all the terms were in advertisements. Docking your Sony Clie… docking your notebook computer. Docking your digital camera!

Speaking of newspapers… Vancouver’s local “press” (I continue to use that term very loosely) continues to disapoint. Not only was there no coverage of the Canadian Coffee and Tea Expo leading up to the show last weekend, but after checking for a week solid, I saw no coverage at all of the Canadian Barista Championships. The Sun and Province have both been contacted about both events, and press releases have been sent out.

Meanwhile, I’ve been interviewed by no less than four other major newspapers (three in the States, one in Canada) about the Barista competition, (major means over a million papers sold per day), and one has already published the story. When the really large paper of that bunch runs their story (if they do), I fully expect the Sun to do what it did in February – they completely ignored the Seattle Barista Jam and Jon Lewis (JJ Bean) event even though they were callled… until the USA Today ran a major, full page story on the event and talked favourably about the local Baristi who went down to attend and do well. But with the USA Today story, THAT AFTERNOON, a Province reporter woke up, sniffed around, and made a few phone calls, resulting in a small article in the paper the next day.

When Lewis placed second in the United States Barista competition, they didn’t even send a reporter down. They did a 5 minute phone interview.

Contrast that with the approximately 3.5hours I’ve spent talking to a NY Times editor in the past week or so. She doesn’t even know what the article (s) may be about yet, other than one specifically about the consumer member inititative with the SCAA, but she is full on in reporter / gatherer mode, and I can hear the constant typing on the keyboard as we talk.

My experiences with US press have been extremely favourable, and to be frank, surprising and enlightening. For the most part, the reporters really do their jobs – asking tough questions, probing, spending, in many cases, several hours doing their interview. Mark Ramirez from the Seattle Times talked to me for at least an hour down in Seattle, and at least 3 hours in two phone conversations prior to his major story on the art of the Barista.

Meanwhile, we have the local Sun and Province who, if aroused from their sleepy desks, do a 5 minute phone interview, and then get half the facts wrong (in Lewis’ short article about his USBC win, the paper got several things wrong, and when Sherri Johns sent them a request for correction email (a very polite one), they ignored it. Correct facts are not a priority at the Sun or Province, it seems).

And before anyone out there thinks I’m pissed because I don’t have my name in the local paper, this is not why I am pissed at all – I couldn’t care less if my name appeared in the Sun or Province. But I think it’s a matter of local pride that we had a Barista who finished second in the US championships. I think it’s a matter of pride that a local Barista won the first ever Canadian Barista Championship. And I think it’s entirely newsworthy – I’ve read a lot of the Sun this past week, and come to realise more and more that they simply rehash their content – as an example, a woman was fired from Starbucks for having a nose-stud that she wouldn’t remove. With her Indian background, she considers it discrimination. The Sun has been covering this for several days, and each day they seem to regurgitate the same quotes and the same info with only a few minor updates.

After seeing the performance level of many a reporter south of the border, the reason I’m pissed at the Sun and Province is not because my name isn’t in the paper – it’s because of how shoddy their reporting skills are. It’s a crying shame. 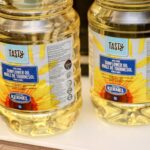