A Night at the Market 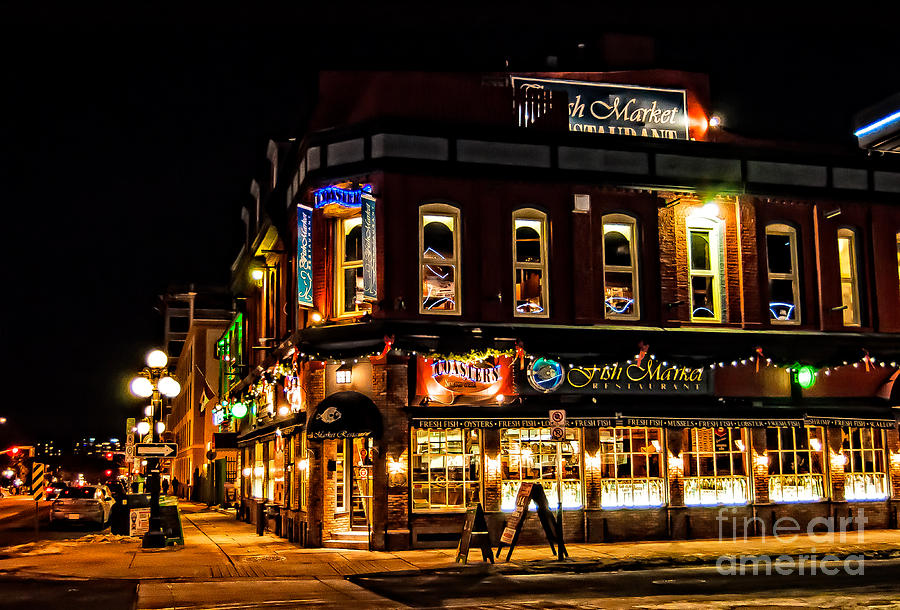 Ottawa’s Byward Market is well known, since it’s one of the premier attractions of that city. It features farmers selling their goods during the day, and good entertainment at night, with all the street performers, interesting collage of nightclubs, restaurants, and pubs, and many people wandering about. Back in the late 80s, the Market was the focal point for night entertainment, before the 1am exodus to the bars in Hull.

One memorable night involved the usual pub hopping, but with a lot of strange twists. We started out, like we always do, at the Laff (the Chateau Lafeyette), a crusty dungeon of a hotel pub that dates back to the mid 19th century. The Laff holds the distinction of having more people murdered there than any other hotel pub in North America. Ottawa used to be a pretty rough frontier lumber town.

We loaded up at the Laff on cheap $1 beers, served by the cankerous old wolverine of a waiter. At around 9pm, we wandered over to Pizza Hut for some grub. There were 5 of us, and we loaded up on pizza and more suds. By that point, I was feeling little pain, so it took me a while to figure out that when everyone went to the bathroom at the same time, they were actually ditching and leaving me with the bill. Being the adventurous type that I was, I dived towards the patio area, over the railing, and soon had the manager and two Pizza Hut servers chasing me through the Market!

I was able to ditch them, and found some of my friends, Jeff included, laughing their heads off, right near the entrance to the Old Fish Market restaurant. I was a little miffed, but only because I didn’t think of the trick first. We headed up into the OFM (it’s up a flight of stairs), and relaxed on their comfy couches in their lounge area. Soon, the drinking started afresh. It was a good time in my life – I had some good drinking buddies, I was pretty much carefree, in my first year of university, and I even had a few good, close friends. We enjoyed hanging out, we enjoyed being part of a group. And, you could still smoke in most bars and restaurants back then.

Pretty soon, it was time to head to Hull, so we started to leave. Jeff decided he wanted a souvenir from the Old Fish Market, and on the way down the stairs, he grabbed one of those big air ducts you see on old ships, on their decks. I too wanted a souvenir, so I snagged a lobster trap and some buoys. Of course, the manager saw us, and they gave chase. It must have been a very comical scenario… Jeff running down the street with a giant white ship air duct, and me with a lobster track, being chased by a 350 lb. Manager and two bouncers. I really don’t know how we got away, but after Jeff ditched the air duct, we did.

Then Jeff, in his usual exhibitionist way, decided that it would be cool to run through the market with his pants around his ankles… which he did. I don’t know why he does stuff like this, but he pulls this kind of trick once I a while. We all laughed, and then Jeff dared me to do the same. I laughed some more. Then he challenged me, dared me, with the promise of free booze… so I did it. There was a picture of me in the Charlatan, my university’s student newspaper, running through the market, with my jeans around my ankles. Nice publicity. Oh well, I got free admission to one of the Hull bars and free booze for the rest of the night out of that deal.

Once we managed to flag down a cab to Hull, the four of us (we lost a straggler), made it to the main strip. We went to the Bijou, which is a Hull version of the Laff. After tanking up once again (something we did often in those pre politically correct days) we stumbled off to Bistro Bistro, a dancebar. Apparently, I made out with an incredibly disgusting woman that night, but by this time, I was beyond any cognizant ability. The only thing I remember is waking up on the floor of my bedroom the next day, with a phone number scrawled on my hand. Oh well, another typical night in the Market.