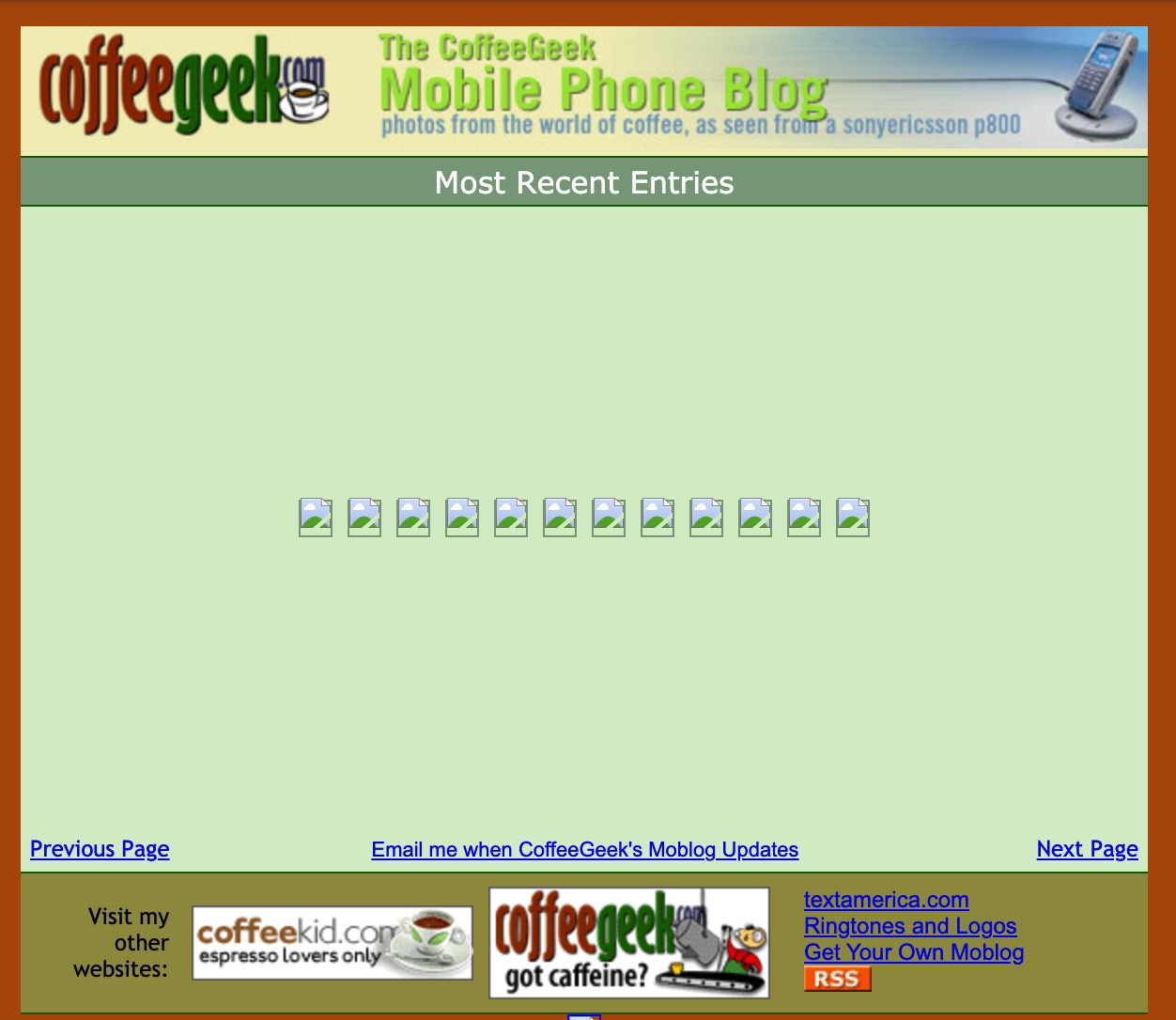 Anyone out there remember moblogs?

It was a new service in 2003 provided by a company called TextAmerica that allowed you to upload, directly from your camera phone or mobile device, a photo that would be hosted on a website. All your photos would be hosted, one after the other. You could design the landing page yourself, and it could be viewed on desktop browsers. It provided a way for you to digitize and immediate-tize your life for others to see. You even got to have a vanity website address, like myname.textamerica.com.

I was a very early adopter of the technology, so much so that the people running it got me involved in promoting it and improving the service.

I wrote about it on this website a few times.

The first time I wrote about it, it was to introduce the service, along with having some snarky comments about poor photography.

The second time I wrote about it, it was to further promote the service and a contest I was asked to judge in by the TextAmerica people. Around that time, I had one of the more popular “moblogs” (yes it was the CoffeeGeek Moblog) and it was even featured in some tech and design magazines. I was prolific on it, posting moblog photos from trade shows, coffee events, training sessions, barista championships and more. According to TextAmerica, at one point, the CoffeeGeek Moblog was in the top 500 of all their hosted blogs (apparently, there weren’t a lot of celebrities and Kardashians on the platform, so I guess that made sense).

Heady times, 2003. Flickr was brand new. Twitter, Facebook, even Myspace didn’t even exist yet. Digital photography was still in its infancy (though you could get some decent 2 and 4 megapixel cameras then). Smartphones were the Sony Ericsson P800 and that’s about it. But flip phones and bar phones started having cameras, and access to limited internet (including the ability to email).

That was the birth of the mobile blog, or moblog — a kind of “checking in” service that allowed you to take a picture or write a short text on your phone, and send it by email to a web service which would publish it online in a predefined layout and format. Your friends could then see what you were up to at that moment.

TextAmerica’s Moblog had such promise. It basically was Instagram long before Instagram existed. Sadly, it was poorly managed by the owners.

It became very popular, so much so that it cost a fortune to run, and the owners at the time also lived a rather lavish lifestyle with the venture capital money they were able to raise.

By 2006, TextAmerica was going broke, so the owners took a rather harsh stand: they started charging membership fees in July, 2006, and also took the very unpopular step of deleting content uploaded to all the previously free accounts just a few months after.

The service and interest in it tanked, and it devolved into a seriously shitty experience. You just knew the service wouldn’t last long, but there was some last minute drama and craziness between two “vigilante” groups who hated what had become of TextAmerica’s moblog service. One, the TA Mafia, basically ruined the entire site experience for everyone. The other, “The Darkside” started up a digital turf war with TA Mafia. I knew people in both groups. They had a lot of axes to grind.

In a way it was replaced by the increasingly popular Blogger service, which had enabled mobile uploads of content for some time (indeed, Blogger hosted millions of “moblogs” in the 2003-2010 era). The thing is, Blogger wore many hats, and mobile blogging or photo blogging was just a minor one.

Then there was Foursquare (another “check in” kind of website cityguide and early mobile app that had additional features beyond photos) which added sharing and community features. Then a little mobile-only app called Burbn came along in 2010.

Burbn was similar to Foursquare, so much so that the owners decided a few months into its life to refocus on its most popular element – uploading mobile photographs. As a “check in” service. 3 years after the demise of Moblogs and TextAmerica, Burbn changed its focus to pretty much exactly what Moblogs were, and rebranded as…

The rest, is history.

Addendum: Just imagine if the TextAmerica Moblog folks were as savvy and forward thinking as Instagram’s creators. Wow. They’d be billionaires now.